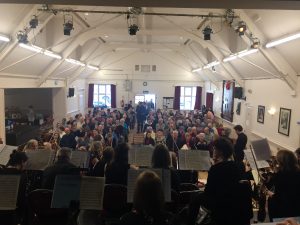 Our orchestra returned to the Chorleywood Memorial Hall for an uplifting concert Spring concert and were joined by the very talented Yume Fujise who performed Vaughan Williams  “The Lark Ascending” with breath taking skill ably conducted by Miffy Hirsch who owing to a leg injury conducted from a high stool!

The concert began with a rousing performance of “Fanfare to the Common Man” by Aaron Copland which included 7 French Horns, four trumpets, three trombones and an enthusiastic percussion section. The pace then switched to the swirling seas of the Hebrideas for Mendelssohns Hebridean Overture with its moody strings and rise and fall.

In keeping with the theme of Spring we continued with two short pieces by Delius “On hearing the First Cuckoo in Spring” and “The Walk to the Paradise Garden” both have strong melodies and the cuckoo kept our founder, Andrew McFarlane, busy!

During our interval, the audience we treated to delicious cakes served by enthusiastic volunteers and we span the chocolate tombola while selling Chorleywood Orchestra Apple juice from our own principle conductor, Richard Wainwright.

The second half of the concert was begun with the premier of local musician and composer, Adrian Warren’s delightful “Melting into Spring” in a mixture of 7/8 and 6/8 time, the melodies dance around the orchestra like drops of meltwater from trees. Our finale was Schubert’s “Unfinished Symphony”, a treat to play with strong melodies and brooding strings.

The Orchestra loved performing to such a warm audience and are delighted to their support as one new audience member said:

“It wasn’t the coming of the mail coach and the railways which finally brought civilisation to remote Chorleywood. It was the Chorleywood Orchestra. What a wonderful festival of joyful music you treated us to. The perfect programme of superb musicianship linked to the imminent arrival of Spring and new hopes and dreams. We danced all the way home. Indeed we even greeted the usual harbingers of imminent doom on this morning’s radio by laughing.”

We’re already rehearsing for our next concert on the evening of the 10th November which will be part of a remembrance week event held in commemoration of the end of the WWI.