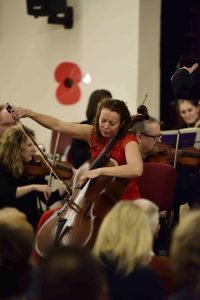 On Saturday night, Chorleywood Orchestra were proud to present their Remembrance Concert marking 100 years since the 1918 Armistice.

The programme began with a powerful performance of “Hymn to the Fallen” by John Williams from the film Saving Private Ryan. The Brass section was joined by many young musicians which made John William’s lyrical melody come alive, we were also joined onstage for the first time by a choir who subtly evoked the feelings of shared humanity, compassion and hope.

The whole orchestra combined for the first performance of Adrian Warren’s Prayer for Peace. The opening conversation between trumpet and violin describes the isolation of war, a mournful trombone solo is picked up by the French horns while a tubular bell chimes in the background denoting the loss of life. The piece then moves on through aspirations of freedom and peace with the final bars expressing a determination never to forget those who have gone before for our freedom and safety.

And one musician who went before was George Butterworth, who because of his death in the early days of the 1st battle of the Somme, deprived the world of more of his beautiful music. “The Banks of Green Willow” is one of his best know works, capturing the nature of the English Countryside.

Elgar’s “Sospiri” and Andrew MacFarlane’s “We Will Remember” brought the first half to a close. “We Will Remember” is a song recalling Lawrence Binyon’s 1914 poem “For the Fallen”. Mostly set to strings and woodwind, Eleni Katerini powerful solo captured the mood of anger at the loss of young men bravely facing incalculable odds while the flute solo lifts the spirits in remembrance.

In the second half of the concert the orchestra were proud to accompany Nicola Tait Baxter in Elgar’s Cello Concerto. Nicola’s lightness of touch and powerful, sonorous tones, were breathtaking, one audience member mentioned that it was like having Jaqueline Du Pre in Chorleywood. The Orchestra are so grateful to have had the opportunity to rehearse and perform with Nicola, we have learnt so much working with her.

No Remembrance concert would be complete without a performance of Elgar’s Nimrod and as the concert drew to a close we paused in memory of those who had gone before. #notforgotten

Our conductor Richard said “You played with real musicianship and commitment and the concert was an enormous success as a result. Looking forward to our Viennese inspired concert on 13th January 2019!